Sylhet (Bangladesh), Oct 2 : On the back of a dominant show by spinners, Pakistan opened their account in the Women’s Asia Cup by defeating Malaysia by nine wickets at the Sylhet International Cricket Stadium (SICS) on Sunday. 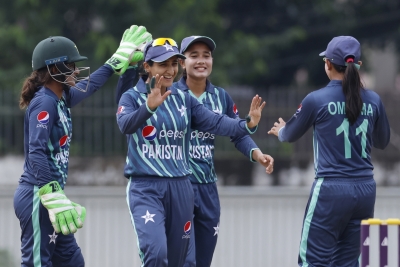 After Malaysia barely managed to post 57/9 in their 20 overs, Pakistan chased down the total with 11 overs to spare.

After opting to bowl first in overcast conditions, Pakistan bowlers made full use of the conditions as pacer Diana Baig struck on the second ball of the innings – getting Malaysia’s captain Winifred Duraisingam out caught behind for a duck.

The spinners then joined in and dominated the Malaysians.Omaima Sohail (3/19), Sadia Iqbal (1/8) and Tuba Hasan (2/13) shared six wickets between themselves.Malaysia’s Elsa Hunter was the only batter of note for the side, making an unbeaten 29 off 51, which included three fours to help her side avoid ignominy of being bowled out and score 57/9 in 20 overs.

Chasing a modest 58-run target, Pakistan’s opening batters provided a 45-run start to the run-chase in the batting power-play.Right-handed batter Sidra Amin fell on the last ball of the powerplay to Mahirah Izzati Ismail for 31, striking five fours in her 23-ball innings.

Her opening partner wicketkeeper-batter Muneeba Ali returned undefeated on 21 off 23 balls, smashing three fours with captain Bismah Maroof, who remained not out on eight off eight balls to get an easy win over Malaysia.Pakistan’s next match will be against hosts and defending champions Bangladesh on October 3.