By Saiyed Moziz Imam ZaidiNew Delhi, June 27 : Former Union Minister Yashwant Sinha, who on Monday filed his nomination for the July 18 Presidential poll as the Opposition candidate, said that this will be his last electoral battle as he signs off by contesting for the country’s top post. 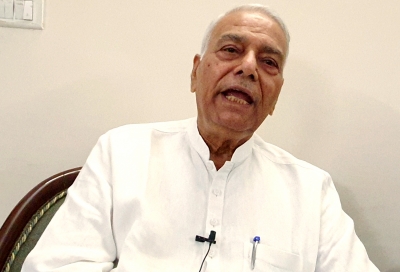 In an interview to IANS after filing his papers, Sinha spoke on how he views the battle and his rival candidate, Draupudi Murmu of the NDA, what sort of support he expects in the poll, and his take on politics now and when he was a minister in the Atal Bihari Vajpayee government.

Following are excerpts from the interview.

Q: You had such an illustrious career in the administration.How different will this electoral fight be as this is for a non-political post?

A: You are right.I would like to start by saying that this will be my last electoral battle.

I fought many electoral battles in my life and this is my last battle and I am very happy that I am signing off my electoral career by competing for the topmost constitutional post in the country.

This (electoral battle) is very different one because it is for the topmost constitutional post, and the other is that large number of parties are supporting me against the other candidate who has been sponsored by the government.

So, it is going to be a good fight.

Q: You have held crucial portfolios in Vajpayee government.How different do you find the functioning of this government in comparison with Atalji’s government?

That is why the institution of the democracy in our country have been devalued in the last eight years and they have ceased to function.

This is the plight of democracy in our country.India, which was well known for its democracy, is being described as the elected autocracy, which is a matter of great concern.

And, I am in this fight for these principles.

Q: It is being said that battle is not about you and Murmu but it is about ideology.You have been the minister from the party which is ruling India today, so how different is it now?

A: As I told you, the style of functioning is different.confrontation, and the policies which are being followed are being dictated by one person and the cabinet minister has no role.

The government is following disastrous policies whose results are the social unrest in the society.Youths are today out on the streets because they are suffering in various ways and the government has shown no concern.

This government’s style of functioning, its policies.everything is wrong and has taken the country to its downfall.

Q: You have been Finance Minister for many years, how do you find the current economic situation.

A: First of all, the figures put out by this government are not credible.This is the first time it is happening in our country that figures and statistics are distorted by the government and are not dependable.The economy is in a mess.

It has been declining consistently after demonetisation and people are suffering.Ultimately, if economic growth does not take place, the people suffer because per capita income goes down.

Q: Do you see an A.P.J.Kalam-like situation in this presidential poll where both the Congress and the then ruling BJP suported him?

A: I don’t think so as this government does not believe in consensus and if they had they may have done something, but this government, as I have said, believes in confrontation

Q: Do you think things will change by July 18?

A: By July 18, things will change as many parties will come out in support.