Hyderabad, Oct 7 : The Telangana Rashtra Samithi (TRS) on Friday announced that Kusukuntla Prabhakar Reddy will be its candidate for the November 3 by-election to the Munugode Assembly seat. 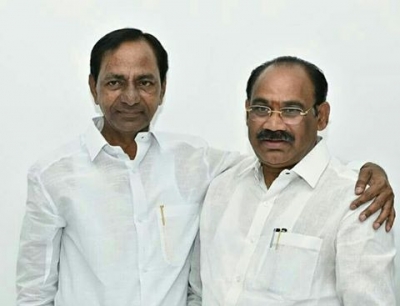 KCR, as the Chief Minister is popularly known, took this decision after examining the survey reports and opinions of local leaders, activists, district party leadership and people of the constituency, the party said.

Prabhakar Reddy has been a TRS activist since the party’s inception and working closely with the people at the field level.

“Congress and BJP will be fighting for second and third positions,” he said.

KTR said that the survey done by TRS shows that it is ahead of its rivals by 12-13 per cent votes.

He alleged that Komatireddy Rajagopal Reddy resigned as the sitting MLA and joined BJP as his company has received a contract worth Rs 22,000 crore from the Central government.

KTR also claimed that Rajagopal Reddy has assured Union Home Minister Amit Shah that he will spend Rs 500 crore to win the by-election.

The TRS leader alleged that the BJP was planning to distribute Rs 20,000 to Rs 30,000 to every voter to win the by-election.

“Despite all their efforts, TRS will win the by-election,” he said.

Meanwhile, the Election Commission of India on Friday issued Gazette notification for the by-election.The last date for nominations is October 14.

Scrutiny will be done the next day while the last date for withdrawal of nominations is October 17.

Rajagopal Reddy, who resigned as MLA and also quit Congress party two months ago, joined the BJP on August 21 in the presence of Amit Shah at a public meeting in Munugode.He is likely to file the nomination as BJP candidate in next couple of days.

Last month, the Congress announced Palvai Sravanthi as its candidate for the by-election.

She is the daughter of former MP Palvai Govardhan Reddy.