Kolkata, Sep 28 : India’s leading human rights group, Association for Protection of Democratic Rights (APDR), on Wednesday, demanded the withdrawal of the ban for five years imposed on Popular Front of India (PFI) and its affiliate organisations, by the Union Home Ministry. 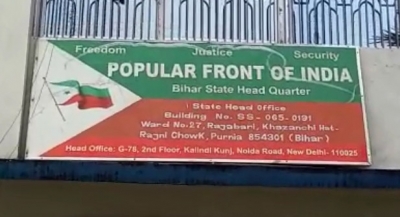 According to APDR general secretary, Ranjit Sur, PFI, with its declared objective to work for the achievement of socio-economic, cultural and political empowerment of the deprived, downtrodden and the nation at large, claims to work with minorities and historically marginalised.

“Its political wing, the Social Democratic Party of India (SDPI) has participated in elections from the level of Parliament to the local bodies and some of its representatives are being elected as well,” Sur pointed out.

He also said that APDR strongly believes that every organisation in this country has the right to uphold its ideology which can be contested ideologically and politically only.

“Banning an organisation can never be the answer to an ideological and political issue, and the Union government should issue a white paper on what it has achieved in past by banning organisations and what can be achieved by this latest banning.Therefore, in irrevocable terms, APDR demands immediate withdrawal of the banning notification and unconditional release of all political prisoners arrested in this connection,” he said.

Meanwhile, on Wednesday evening, the Communist Party of India (Marxist-Leninist) general secretary, Dipankar Bhattacharya, while interacting with the media persons, said that the ban on PFI is a ploy to “terrorise the Muslim population in the country”.