New Delhi, March 4 : The National Mission for Clean Ganga (NMCG) was awarded the ‘Special Jury Award’ for “bringing about a paradigm shift in water management” at the 7th India Industry Water Conclave and 9th edition of FICCI Water Awards. 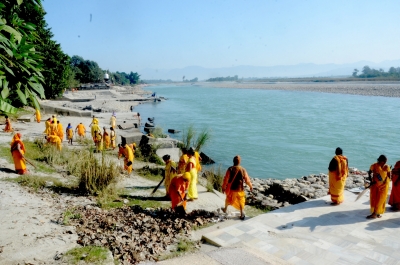 “The Jury wishes to recognize the extremely important work NMCG is engaged in, to bring about a paradigm shift in water management, even as they endeavour to revive river Ganga.The Jury would like to emphasize the need to work even further on involving primary stakeholders to build a real Jan Andolan around the river Ganga and to pay greater attention to bringing together all departments and agencies whose joint efforts are needed to revive the river Ganga, recognizing that rejuvenating the river requires working on its entire riverscape, with its inter-connected hydrological and ecological systems, not limited only to the main stem of the river but also including all different orders of streams and their catchments, as also the aquifers that provide base-flows to the river,” read the citation with the award.

The Award was given at the event held virtually, from March 2 to 3, a release from the Ministry of Jal Shakti said on Thursday.

The citation underlines the complexity of the task of rejuvenation of the entire Ganga basin and the importance of engaging with diverse stakeholders particularly the people-river connect which forms the basis of NMCG’s approach to the challenging task, the release added.