Ahmedabad, Oct 2 : Reigning World under-20 champion Antim Panghal made a superb start in the National Games, winning the gold medal on debut in the 36th edition of the Games here on Sunday. 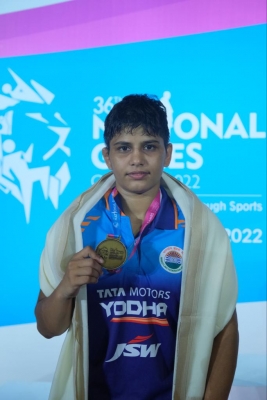 The 18-year-old from Hisar defeated Madhya Pradesh’s Priyanshi Prajapati by fall in the women’s 53kg wrestling event to enhance her reputation as the top talent in the country with a dominant display on Sunday.

Antim, who relies on meticulous homework on her opponents going into her bouts to dominate them, was her usual self in the National Games too.

“She would keep pursuing as soon as we end our training sessions before any major tournament to search for videos of her opponents.At times it gets difficult to collect videos, especially in domestic competitions as most coaches don’t like sharing inputs, which is quite understandable,” her coach Vikash Bharadwaj said as he patted Antim on her return from the mat.

“I told her before going for the final bout against Madhya Pradesh’s Priyanshi, that you should target win by fall.She’s already in the 53kg category while Priyanshi is from the 50kg, so there’s always an edge,” Vikash said.

Antim had joined the Babba Lal Das Wrestling Academy in 2016 as a 12-year-old after one of her four elder sisters, a kabaddi player, spotted a wrestling academy in the remote Baghana village of Hisar.She contacted the coach after discussing it with her farmer father.

“She was 12 when she joined our academy, and we found her a perfect fit for wrestling.She had the perfect physique and temperament for being a wrestler, but what actually made her stand out in the crowd was her passion for the sport.She would keep training for hours without a single complaint while others would keep requesting to lessen weight training.

For Antim, it was always like what’s next, and we would coax her to rest,” he said.

The loss in the Commonwealth Games qualifiers to eventual gold medallist in 53kg weight division Vinesh Phogat, left young Antim dejected.The youngster doesn’t like losing, and on Sunday her prowess was on full display as she opened up a big 5-0 lead early on before taking the gold by fall in her debut Games.

“Isko bas medal ki bhookh hai…(she is only hungry for medals).After the loss to Vinesh in the qualifiers, she took it as a challenge to win big in her next competition.The National Games is good exposure for her, we worked out on a few technical flaws which she committed in the bout against Vinesh,” her coach Vikas said.

Gujarat’s Khalifa Hina and Maharashtra’s Swati Sanjay grabbed the bronze medals on offer in the category.

In other categories, seasoned Maharashtra grappler Narsingh Pancham Yadav had to settle for the bronze in the men’s freestyle 74kg divi’ion, in which Delhi’s Yash took the gold after getting the better of Haryana’s Sagar Jaglan in the final.

In the women’s 57kg category, Haryana grappler Mansi registered a thumping win over Chandigarh’s Neetu by fall to pocket the yellow metal.

Preety Kumar of Rajasthan and Sonali Mandlik of Maharashtra took the bronze medals after winning their respective bouts.

In Greco Roman, Gyanender of the Services took th’ gold medal while Haryana’s Vikas took home the silver in the 60kg category, while in the 130kg class, Haryana’s Satish bagged the gold after Services grappler Naveen skipped the final due to an injury.

Gursewak Singh of Punjab and Yatendra of Uttar Pradesh bagged the bronze medals in the category.