Ahmedabad, Sep 28 : Commonwealth Games gold medallist Nayanmoni Saikia (Assam) was a picture of confidence on the opening day of the high-profile Lawn Bowls competition in the 36th National Games, comfortably winning two singles matches and one team game at the Kensville Golf and Country Club near here on Wednesday. 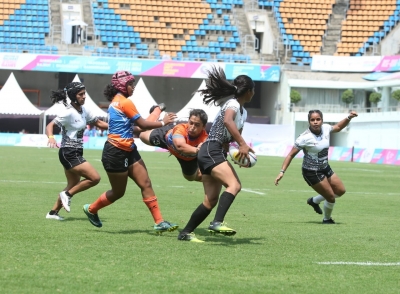 Nayanmoni Saikia started the day with an emphatic 23-0 victory over Gujarat’s Vaishali Makvana in a Group A contest and ended it with a 21-10 win over Beena Shah of West Bengal.

In between, she joined her Assam teammates to post a 33-3 verdict against Manipur in the Fours competition.

A member of the Indian Fours team which made history in Birmingham last month, Nayanmoni Saikia is delighted that her sport is drawing a lot of attention.”The gold medal provided the impetus for Lawn Bowls.But we have to make sure that our win wasn’t a fluke.We have to keep performing to sustain its popularity,” said Nayanmoni, a Deputy Superintendent of Police in Assam, after a highly successful day.

“The National Games is getting bigger and better.Naturally, there will be pressure on every athlete.But it is up to the senior players to leave a mark and show the way,” said the 34-year-old from Golaghat, still getting to terms with the adulation and attention after the Indian team’s feat in Birmingham.

Meanwhile, in Bhavnagar, Gujarat men’s Netball team warmed the fans’ hearts by making it to the semifinals with a splendid 57-33 victory over Punjab in their last group A contest.Needing a win to avoid a triple tie with Punjab and Madhya Pradesh, Gujarat stuck to their task and kept themselves well ahead in the match.

Gujarat will meet the winners of Group B while Group A toppers Haryana will play the other semifinal.Telangana and Delhi took the two Group B places in the last four stage.

Telangana and Delhi both finished with two wins and a draw from their three matches each.

Back in the EKA TransStadia Football Stadium in Ahmedabad, Delhi and West Bengal became the first men’s teams to claim Rugby 7s semifinal berths, both beating Punjab and Odisha in their group B matches.

The first of the shooting matches gets underway on Thursday at the Rifle Club with the 25m Rapid Fire Pistol Stage 1.That is expected to offer a riveting contest among the athletes, especially with Anish Bhanwala (Haryana), Vijayveer Sidhu (Punjab), 2012 Olympic Games silver medalist Vijay Kumar (Himachal Pradesh) and Gurpreet Singh (Services) in the fray.