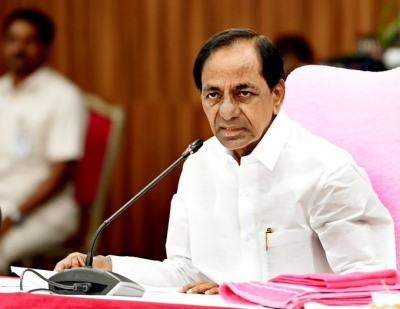 He said the party would pick up Maharashtra as the first field of activity by launching the farmers’ wing of the party from there.

Rao stated this during his speech at the general body meeting of the TRS, which unanimously passed a resolution to change the party’s name to the BRS.

KCR, as Rao is popularly known, also made it clear that while continuing as the Chief Minister, he would visit all parts of the country.”We will not leave the ground.No one should have any doubts about this,” he told party leaders.

KCR’s remarks came amid speculations in political circles that his son K.T.Rama Rao will take over as the Chief Minister while he will focus on national politics.

The TRS founder called for developing a bright India.”If resources of our country are used within the country, we can develop better than America.We still have time.We will expand across the country,” said KCR, who has his eyes set on 2024 Lok Sabha polls.

The Chief Minister also stated that if good happens to the country because of Telangana, this would go down well in the country’s history.

KCR also revealed that Dalit, farmers’, and tribal movements would be carried forward as the main agenda.He vowed to remove social and political disorders across the country.”Telangana has already shown this to the country.We will take stock of the evolving situation from time to time and move forward,” he said

He called for taking the country forward just as the Telangana movement was carried to victory.He claimed that Telangana ensured development of every community.

He said both the rural and urban areas in the state have developed and the awards announced by the Centre were a proof of this.

He recalled that the TRS made a beginning 21 years ago.” Within a short time after achieving Telangana state, we moved forward rapidly by implementing development programmes in all sectors including agriculture, electricity, irrigation and drinking water.The neighbouring states are wonderstruck by seeing programmes in Telangana state.All this was possible because every action is being executed with utmost commitment.”

KCR said that in the 75 years of Independent India, parties that ruled the country have done nothing for the country except coming to power or leaving power.He claimed that politics is a task for the TRS, while for other parties it is only a game.

“We worked with commitment as activists for the development of Telangana.Due to hard work, great achievements have been made.The per capita income of Telangana was only Rs one lakhA when the state came into existence but today it has increased to Rs 2.78 lakh.Telangana’s GSDP was Rs 5.6 lakh crore in 2014 and today it has reached to Rs 11.50 lakh crore,” he said.

KCR called for working hard and collectively for the country’s development on the lines the TRS strove for the development of Telangana state.

“It is not a hasty decision to float a national party.India is a union of states.Comprehensive development is possible only if the states and the country develop together.Telangana’s GSDP is originally supposed to be Rs 14.5 lakh crore.But Telangana is not able to achieve the development it deserves due to the short-sighted and irrelevant policies adopted by the Union Government.Many of the sacrifices made for the independence of this country remain unfulfilled.”

The Chief Minister attributed the rapid development achieved by Telangana to out-of-box thinking and innovative programmes implemented in the state.He spoke about one such programme Dalit Bandhu aimed at upliftment of the Dalits.

Stating that agriculture is one of the neglected sectors, KCR said BRS would highlight the problems of farmers as the main agenda and try to influence the politics of the country to address them.

He claimed that leaders of many parties across the country were coming forward to join hands with him.

He said former Chief Minister of Uttar Pradesh Akhilesh Yadav and Bihar Deputy Chief Minister Tejaswi Yadav have assured him that they will attend the historic programme of launching of the BRS.

He recalled that former Prime Minister H.D.Deve Gowda strongly supported the Telangana movement, and his JD-S announced its support to the national party.

KCR revealed that he already had discussions with many economists and experts in various fields and took their advice for the formation of the national party.