Kolkata, July 21 : The Preliminary post-Mortem report of the body of Samantak Das, the Pro Vice Chancellor of Kolkata’s prestigious Jadavpur University, has suggested that the case of death is anti-Mortem in nature and hence, it was a case of suicide. 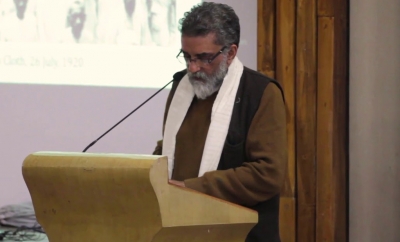 However, the investigation officials of the Kolkata Police have decided to continue its probe to find out the circumstances under which this popular teacher of Jadavpur University chose to take such a drastic step.

They are questioning Das’s relatives, friends and his colleagues and students in the varsity as well as thoroughly examining the mobile phone and the laptop of the deceased teacher to get some clues in this connection.

The body of Das was found hanging from his residence at Regent Park in south Kolkata on Wednesday afternoon.

His body was recovered hanging from the ceiling fan of his residence and a medium of hanging was a karate belt.No suicide note was recovered from near his body.

Das completed his graduation and post-graduation in English literature from Jadavpur University only.Previously he was associated with the English Department of Visva-Bharati University at Bolpur-Santiniketan in Birbhum district.

In 2005, he joined the Comparative Literature Department of Jadavpur University.He was also associated with its Rabindranath Studies School.

Before becoming the Pro-Vice Chancellor, Das had also been departmental head of the Comparative Literature Department of Jadavpur University.