London, Sep 27 : The German government is concerned that Britain is conducting a ‘major experiment by cutting taxes and boosting borrowing just as the central bank is raising interest rates, a media reports said. 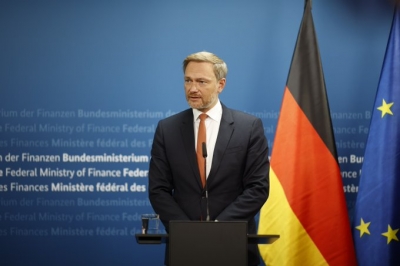 In another sign of rising international concern, Lindner warned: “In the UK, a major experiment is starting as the state simultaneously puts its foot on the gas while the central bank steps on the brakes.”

Speaking at an event hosted by the Frankfurter Allgemeine Zeitung newspaper on Monday, Lindner suggested that it wouldn’t end well.

“I would say we wait for the results of this attempt and then draw the lessons,” he said, The Guardian reported.

Larry Summers, a former US Treasury secretary, has warned that the UK government’s ‘utterly irresponsible’ plans could drag the pound below parity against the euro, as well as the dollar.

Summers has heavily criticised Chancellor Kwasi Kwarteng for undermining credibility by saying ‘incredible things’ about planning more tax cuts — those weekend comments pushed the pound to a record low of $1.0327 on Monday.

Summers said he was “very pessimistic about the consequences of utterly irresponsible UK policy on Friday”, but didn’t expect the markets to get so bad so quickly.

Summers also suggested the Bank of England should have taken more decisive action, rather than its timid statement on Monday.

Summers said, “The first step in regaining credibility is not saying incredible things.I was surprised when the new chancellor spoke over the weekend of the need for even more tax cuts.I cannot see how the BOE, knowing the government’s plans, decided to move so timidly.”