Puri Jagannath’s son Akash Puri has recently completed an upcoming romantic saga titled ‘Romantic’ in which Ketika Sharma is playing the female lead and the movie is being helmed by debutant director Anil Paduri.Ketika Sharma is making her Tollywood debut with this film. 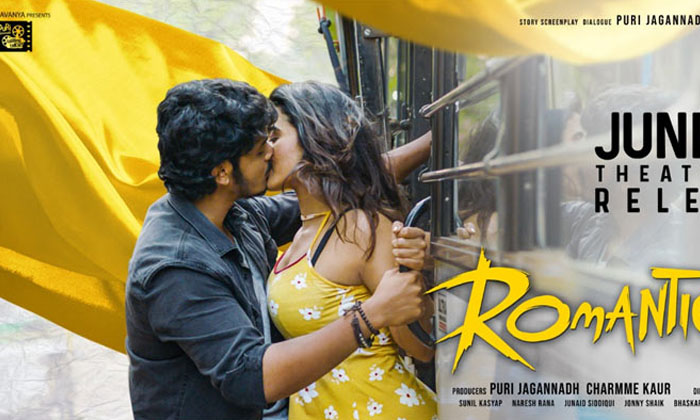 Today morning the makers of ‘Romantic’ confirmed the release date of this Akash Puri starrer by sharing a new poster.The film will be out in theatres on 18th June 2021 along with Akhil Akkineni’s upcoming flick ‘Most Eligible Bachelor’.

Coming on the poster of ‘Romantic’, the lead pair, Akash Puri and Ketia Sharma are seen in an extreme romantic mood in a bus where they are locking their lips.

Star director and Akash’s father Puri Jagannath has provided the story, screenplay, and dialogues for this film.

Ramya Krishna will be playing a powerful role in the film and it is being heard that she will be essaying Akash Puri’s mom character.The film also has Makarand Deshpande, Uttej, Sunaina, and others playing key roles.

Puri himself is producing the film in association with Charmme Kaur under their Puri Connects banner.Sunil Kashyap scores music for the film, while Naresh handles the cinematography and Junaid Siddiqui is the editor.Meanwhile, Akash Puri has recently started shooting for ‘Chor Bazaar’, which is directed by ‘George Reddy’ maker Jeevan Reddy.Stay tuned for more updates!